RBI Policy Review- Lowest Repo Rate Hike in Six Years with 25 bps to 6.50%. This year quarter one monetary policy of financial year 2016-17 had seen few new changes including the widening of reverse repo and repo rate have been more compromised to 0.50% now. Earlier it was 1%.

RBI has announced the major changes to boost the slowest economy in their Bi-monthly Monetary policy review. 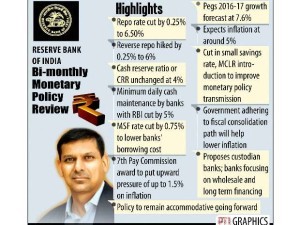 Repo Rate is the rate at which commercial banks borrow money from the RBI. One basis point is one hundredth of a percentage point or bps.

Meanwhile with the cut in Repo rate RBI increased the reverse repo also by 0.50% or 50 bps. Reverse Repo Rate or (Reverse Repurchase rate) is the rate at which banks park excess funds with the Reserve bank. This is further increased to make the difference between Repo and Reverse Repo to 0.50%. Reverse Repo stands at 6%.

Read : How To Calculate Loan Installment to Income Ratio (IIR) ?

Marginal standing facility (MSF) rate is also cut to 7.0%. The Bank Rate which is aligned to the MSF rate also stands adjusted to 7.0%.

CRR has been kept unchanged at 4.0 per cent of net demand and time liabilities (NDTL).

With Implementation of MCLR, the benefit of rate cut will automatically be seen in the EMI of the various loan by next quarter.

Read : Whether to Go for MCLR rate system or Not ?

Effect on consumers of Banks or Loan  : Due to implementation of MCLR or Marginal Cost of fund lending rate, the changes in repo rate will immediately impacted on EMI of the loan account. The falling interest on loan will psychologically prompts one to save less and spend more which ultimately driven the growth.

The repo rate cut will benefit the housing loan customer or real state company a boost due to fall in interest rate will boost the real state market.

How Does RBI Rate Cut Impact EMI of Loan ?