Government of India and Reserve Bank of India (RBI) has banned the existing Rs 500 and Rs 1000 notes from the circulation and transaction with immediate effect. Starting 09th Nov transaction in these two currencies are not valid as the legal tender of these two denomination of notes are stands invalid. Starting November 09th currency of Rs 500 and Rs 1000 will not be having any value.

Government has surprised with their decision not only the common man but also the RBI, Banks and economists.It’s like surgical strike by government to unearth black money, corruption for while and fake currency rackets.Meanwhile government has given the relaxed time from cash menace i.e Time frame to exchange the notes of above denomination with Banking or Post offices within limited time frame.

Read : What You Get in 7th Pay Commission ? 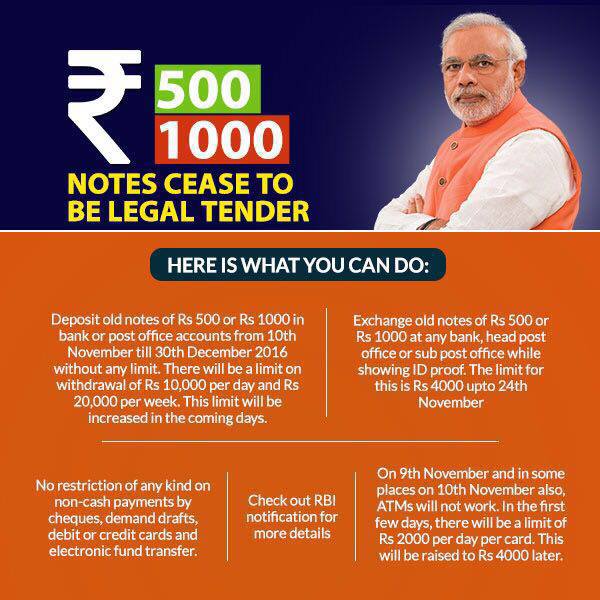 Although the government has banned the Rs 500 and Rs 1000 currency notes but provided certain relation in exchanging the notes with certain pre condition. The various ways through which the individual may transact banned notes are :

This is the boldest move by the government to curb the black money and fake money from the economy. This will help strengthening the Indian currency and improvement in economy. A great start to cashless economy.

If you have had any issue or query on this, Just ask it here below.