Home » Compare MAB Vs AQB, Which is Better for Bank ?
Banking News

Compare MAB Vs AQB, Which is Better for Bank ?

Comparison between MAB or AQB of various banks. Majority of the Banks has moved from the Average Quartly balance (AQB) To Monthly average balance (MAB) in recent times. There are various reason for moving in to MAB from AQB by the banks. Which is more beneficial for customer and banks at large either MAB or AQB, let’s compare ?

All the bank’s penalize their account holders and customer with stipulated amount for non maintaining of Minimum Average Balance (MAB). Recently Public Sector Bank, State Bank of India (SBI) has revised the penalty on their customer for Non maintenance of Minimum Average Balance (MAB). The MAB revised by many of the accounts in various cities by SBI by many folds with Rs 5000 to saving account in major six metro’s.

What is Monthly Average Balance (MAB) ?

Let’s start with the topics Monthly Average Balance (MAB). The average monthly balance is the average of sum total of daily closing balances of the account. Closing Balance refer to sum total of each day balance divided by number of days in month.

Monthly Average Balance (MAB) are calculated on the basic formula of each day outstanding closing balance divided by total number of days in month. While calculating the saving or Current account minimum balance for month only the balance outstanding in the account is considered. No debit balance consideration in the Saving/current account.

[box type=”info” align=”aligncenter” ]Formula for calculating the Monthly Average Balance in current account  = Sum of closing balance at end of all days in a month (Day 1 + Day 2 + Day 3 +…… + Day 30) Divided by Number of Days in a month.[/box] 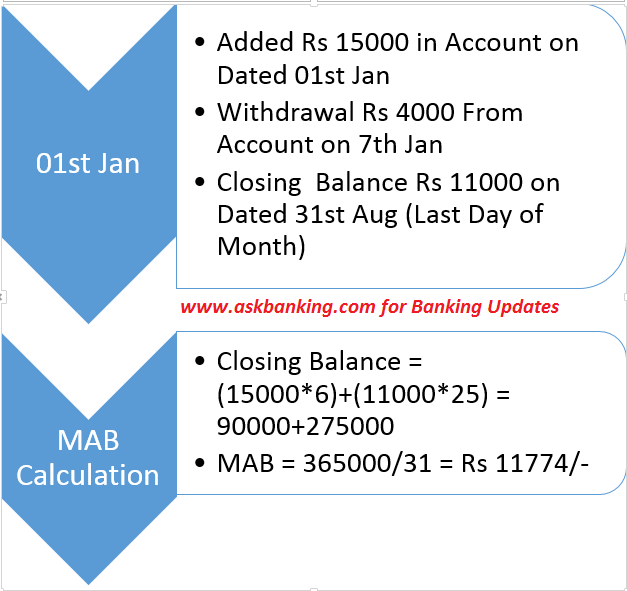 NOTE : This is to remember that while calculating the Monthly Average Balance, All days in the month are considered as working days including holidays and Sundays.

Read : How Does RBI Rate Cut Impact EMI of Loan ?

What is AQB , Average Quarterly Balance ?

AQB or Average Quarterly Balance is similar to Minimum Monthly Balances (MAB) with difference in days only. While calculating MAB we considered the days of month as total number of days in the particular month where as in AQB, we considered the flat 90 days time frame in a quarter.

Which is Beneficial for Banks MAB or AQB ?

Now which of the above average balance is good for banks and bad for customer. Compare the features of AQB vs MAB for better understanding.

Majority of Banks shifted from AQB (Average Quarterly Balance) to AMB (Average Monthly Balance) like all public sector banks SBI, PNB, Syndicate Bank etc. This is done in order to restrict customer to keep more float money at lesser cost. With the Interest payment regime shifted to per day basis, bank has accepted the MAB concept for to cover the potential loss.

Assuming, Out of 100 customer there are only 30 who are doesn’t maintain the Average Quarterly balance (AQB) . There must be 15 more customers who were on the borderline during the quarter but managed AQB for the quarter.

MAB helps in boosting the fees income of bank as there are non maintenance of monthly average balance is less compare to AQB. There is also concept of keeping the NIM (Non interest income) as it is despite of loosing customer base or non maintenance float money. It is believed that chances of charges for non-maintenance on minimum balance is higher under MAB.

Let’s consider the account balance requirement of Rs 10,000 in both QAB and MAB.

Under AQB method balance maintained is

Under MAB method balance maintained is

But if the same will considered against the MAB method :

Benefit of Shifting AQB to MAB To Banks

Check and Calculate the Minimum Average Balance of Any Bank Account