FactCheck “Army Welfare Battle Casualities Bank Account with SyndicateBank” – A viral message spreading around the social meida is claiming that the Modi government has now launched a new scheme “exclusively” for battle casualties and weapon purchase. The message is spreading around and people are conscious about genuiness of the account mentioned in the viral message. The bank and account mentioned in the message as :

Syndicate Bank has officially authorized the presence of mentioned account and said that the account is being used for the noble cause since 2016. Initially the account was opened ‘post the Siachen tragedy in which 10 Army men lost their lives due to an avalanche, there has been a groundswell of sentiments across the nation towards the contribution of the Army.’ 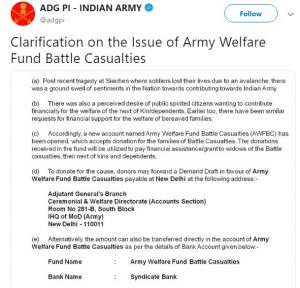 Indian army has also confirmed the genuiness of the account and insisted that the money received as donation to this account will be utilized to provide financial assistance to next of kin/widows/dependants of battle casualties’ and not for buying weapons.