Government wants a tripartite memorandum of understanding (MoU) in this regard between Bank Management, Government concerned and Employees Unions.

Government doesn’t find any wrong in this as :

This is also rumored that a high level committee has been formed for this purpose under the chairmanship of Economist Sri J.P. Patnaik for reduction of employee benefits of all these ten loss making public sector banks.

Based on the information ,it is believed that the proposed reduced in the employee benefits will be under different category i.e.

1) Fixed Salary of Rs 10,000 for sub ordinate staffs irrespective of number of years of services.

2) Fixed Salary of Rs 15,000 for all clerical staffs irrespective of seniority levels.

3) Fixed Salary of Rs 20,000 for all scale I officers including Probationary Officers (PO ) irrespective of seniority.

4) Fixed Salary of Rs 25,000 for all scale II officers irrespective of seniority levels.

5) It is in opinion that the Fixed salary structure for officers in Grade III and above will be decided later by the committee.

All these benefits are combined known as supplementary salary which could be cut for all the levels till the bank shows the considerable profitability.

Employees other facilities LFC, LTC, bonus, Halting allowances etc will be curtled till 2020.

No Benefit of 11th Bipartite Settlement

All these loss laden bank will not be able to pay the arrears of the 11th Bipartite settlement till 2020 though thy will be allowed to participate in the settlement process with IBA.

In the financial year 2020, the balance book of these banks will be reviewed and if there will not be any improvement, Arrears will not be paid only Increased salary will be paid.

It is also believed that Government has already intimated UCO bank, United Bank of India and Allahabad Bank regarding same and Bank management including union of these bank already have accepted this. 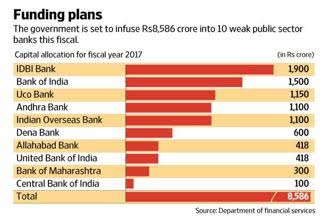 Not sure but it is also rumored that the transfer of all the officers are advised to minimize for further period till bank shows profitability.

SBI Caps has been asked by government to design a detailed bank-wise plan based on which the tripartite agreement between the government, bank’s management and Bank Employees Unions on behalf of employees of the bank  will commit to the milestones. All the concerned Banks have been asked to send in their consent by 25th March in this regard by finance ministry.